One of my favourite things about my most beloved spirit, whisky, is that it presents an almost-endless complexity alongside delicious flavours without the need for anything other than a glass. The best cocktails are the same, however, they often require a fair diligent work and the best ingredients. Pre-made cocktails generally don’t even approach the arena where the top echelons of beverages reside. BUT - there are a few exceptions to this, notably, the Barchef Project.

In 2017, BarChef created a Toasted-Chamomile Old Fashioned, a bottled old fashioned that will likely trump every old fashioned you’ve ever tasted in a bar. The products coming from one of the best cocktail bars in the world are certainly in a category of their own when compared to the bottom-shelf mixers and pre-made cocktails currently on the market.

This late-harvest vesper is the second cocktail released as part of the “Barchef project”. It presents a clever take on the classic Vesper cocktail by using late-harvest vidal in place of the typical Lillet Blanc. But, if you know anything about Barchef, you’ll know nothing is that simple: this featured gin which is custom-distilled gin through hand-harvested spruce tips,

The cocktail is also vintage-dated, a nice touch that I certainly enjoy (along with other cocktail enthusiasts).

I trust the quality of Barchef to the extent that I’d recommend their products without even trying them (rare for me), but, I must caveat - these are all dangerously drinkable.

The nose offers forward notes of juniper and spruce, but this is full of everything else you might want in a gin cocktail – spice, woody notes, fruit, and lots of spice – with a really great flourish of floral, spicy, and light mineral notes on the end. The vidal comes out, with nice clarity, on the finish. The texture of the cocktail is terrific.

I’m not much of a Vesper man but I’d take one of these any day.

This is a nice addition to the Barchef “lineup” – a lighter, gin forward cocktail as opposed to the richer whisky-based old fashioned. They both have fantastic finishes that beg another sip. I love cocktails like that.

An aged rum bottling from Hampden, which is one of the most interesting distilleries in the world, in my opinion - they produce really complex, briny, and almost-smoky tasting rums. This isn’t sweet like many rums (many rums have added sugar).

Smoky, sharp, fruity, briny and spicy – clove and white pepper. Lightly smoky, and almost a bit sulphury. Molasses, green apple, lemon, orange peel, green olives – quite marine in character – and the spiciness seems to grow. Slightly oily and dusty, and an incredibly rich middle. A touch rough, but very complex and interesting. Very unique, I’m glad I have it. The palate is still briny, but with some growing caramel and a sharp molasses note. Olives are all over, and thick molasses grows towards the end. There is a big of smoky vegetal earthiness too, like some mezcals. The finish has baking spice, wood tannin, vanilla, light tannin, and chili. Oiliness seems to grow with time, along with molasses. Big for 40%, and still quite dynamic.

Very good and interesting, but not nearly as dynamic and powerful as the excellent Rum Fire Overproof white rum from Hampdens, in my opinion.

Excellent value, especially if you get it in Jamaica for ~$14!

This bottled cocktail is made by Hochstadter’s, who make an impressive line of rye whiskies alongside the sister brand Lock, Stock, & Barrel. This is a pre-made cocktail with 19th century roots, where it began as a medicinal cocktail and sold widely in pharmacies, with a tax edge until it was reclassified as a distilled spirit.

This is made with straight rye whiskey, naval oranges from Florida, honey from Pennsylvania, angustora-style bitters, and rock candy.

The smaller bottles of this come in neat little cans.

This is quite the nose – very fruity. It’s very grassy on the nose, with lots of chocolate aromas, caramel, candy, orange, baking spices, and sweet richness. The cocktail on the palate is very rich, sweet, candied, and spicy. It’s quite moreish.

This is a bit different (in its flavor uniqueness) from some of the “generic” bottled cocktails on the market. It is a punchier cocktail (42% ABV), so generally it’s focused on stronger-strength cocktail drinkers. If you like easy-to-make cocktails, especially in the old-fashioned realm – give this a go.

Review: Barchef (An Auditorium of Perspective) / January 3, 2019 by Jason Hambrey

Five years ago, I decided to take a month off whisky. Whisky had revealed something to me in a brand-new way – I loved flavour. But I didn’t want to be consumed by it. However, I boxed up all my whisky, and moved it to the basement for a month. A week into my “whisky fast”, I was in a bookstore and stumbled upon an incredible book – Frankie Solarik’s Barchef. The first chapter isn’t even a list of cocktails – it’s a list of homemade bitters, enticing recipes which result in a household of mason jars full of spices and dark, bitter, and spicy infusing spirit.

Within a week I’d made every single bitter and infusion in the book, and within two years I’d made every cocktail in the book –from the brilliant combination of absinthe and homemade orgeat liqueur in Van Gogh’s Downfall, to the Tobacco-infused, dry-ice enhanced Mad Man, to my all time favourite cocktail, Smoke and Mirrors which boldly combines smoke, cherry, and rosemary in impeccable fashion. The must-experience cacao-infused mezcal infusion in the book has completely transformed my cocktail game.

I always thought that the penultimate liquid was whisky, followed by coffee – until BarChef convinced me that cocktails deserved number 2 – or perhaps even number 1 – on my favourite liquid list. Just as I was getting into cocktails, I left Toronto, sadly, and wasn’t able to become a regular visitor to one of the world’s best cocktail establishments.

Recently, I visited the bar to try some cocktails, bitters, and infusions – it isn’t your ordinary bar. Frankie Solarik, the head bartender (the Bar Chef) describes his desire to create an “auditorium of perspective” which engages all of the senses while telling, or provoking, a story. The bar focuses on modernist cocktails, created with the manipulation of texture and fragrance through the techniques of modern gastronomy: liquid nitrogen, dry ice, alginates, foams, creams, and soils. These aren’t pairings you see in bars, but rather, the best restaurants in the world. The cocktails leave it ambiguous as to whether they are to be sipped, or eaten. The bar itself is fitted with fire detectors which use heat, rather than smoke, to enable customers to order manhattans smoked with hickory chips before their very eyes. Indeed, the entire establishment smells lightly of hickory smoke. Just visiting the bar is an experience unto itself. As you sit, incredible smells waft through the bar as your neighbours order cocktails – eucalyptus, hickory smoke, cedar, coconut, patchouli, hickory smoke, basil, pine all made an appearance as I sat at the bar. 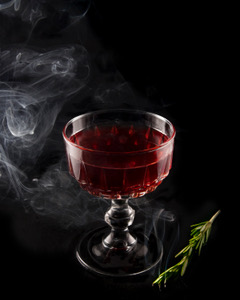 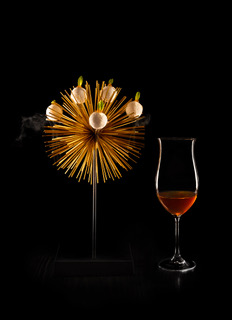 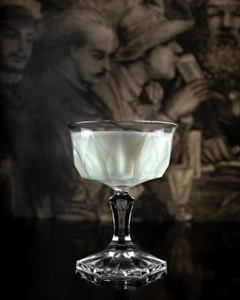 Can I resist but describe some of what I tasted? I had “The Apricot”, a cocktail full of apricot, almond, loads of spice, and oxidized wine. It is slow and textured - initially almost too intense - but it softly unfolds over time as it dilutes and warms. Apricot and chamomile grow with time - but this is only the cocktail! When you order it, it comes with three smoking spheres: nitro-frozen meringues which explode in your mouth with mint, sharp apricot, and a rich herbaceousness. The flavours are accompanied by a puff of steam out your mouth and nostrils! Each of the three meringues hits you differently with the flavours they bring out, each complementing the cocktail brilliantly.

Or, perhaps, the cocktail Essence of Fall (pictured at the top)– a cocktail which smells so richly of earth, fall mushrooms, and cedar – amidst a cocktail full of maple, orange blossom, mint, almond, oxidized wine, and bright floral notes. If that’s not your jam, how about a cacao manhattan, made with house vermouth and cacao bitters? Or Fields of Spruce, a cocktail which brilliantly combines a light, citrus character with Benedictine-like richness, deep herbal notes, spruce, and madeira. They also serve bottled cocktails, of which the king is The Kensington – a brilliant cocktail which uses patchouli to brighten the deep spice in the cocktail, and offsets the richness of Canadian whisky with rosemary and lavender.

What if you don’t live in Toronto? I recommend getting a taste of Barchef anyway – Barchef project is a toasted chamomile old fashioned with terrific bitters. Incredibly moreish and 25$ for 375 mls. It is a “wow” cocktail, and it’s very accessible.

Old Fashioned are perhaps the simplest well known whisky cocktail - a blend of whisky, sugar, bitters, and typically garnished with citrus peel - often made with bourbon or rye as the base. Following BarChef and Still Waters brilliant bottled old fashioned in Ontario, J.P. Wiser's stepped up to the game by blending whisky with orange essence and natural flavor (which includes spices/bitters, based on the taste). It is simple - just pour over ice, perhaps with a citrus peel garnish. It needs some ice, warm and undiluted it isn't balanced and is too sweet - but hits the spot with a nice chunk of ice.

Spicy, citrusy, and lightly sweet - full of orange and spices - clove and a big kick of cinnamon. Light oak, vanilla, and light Canadian whisky spices hold the whisky together between the vibrant orange and the tingling spices. The finish is a battle between cinnamon and orange. Really nice on a hot day (of which we are having many in Ottawa these days!). This fits really well alongside in your beer cooler during a BBQ. Also, this goes quite nicely alongside a hefeweizen....

I can't help but compare. The BarChef project produced a cocktail which you could serve in a high end cocktail bar, but this is more your standard bar old fashioned (and it's better than many I've had in bars!). But, to that effect, it comes in at a nifty $30, 60% of the price of the BarChef project.